Got my Essentials box. Thought I'd do a deep dive.

DISCLAIMER: No comp copies. Paid for this with my cold, hard cash. There is a link to Pinnacle's site, but I get nothing if you spend money there. There is a link to DriveThruRPG down the article, and using my affiliate link may net me some store credit, which I will totally use on gaming stuff. Also, I am not a photographer. Sorry about that.

First off: Seriously, the box could kill a small human...especially if you have multiple rulebooks loaded into it.

It's a very pretty box, with Savage Worlds iconic character Red driving in the rain on her motorcycle. This same image is included on a poster inside. 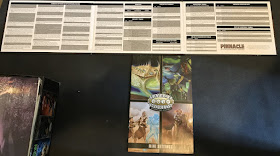 The mini-setting book show above includes four mini-settings (duh): Spirits of 1786 set post-American Revolution, but magic has risen in the Americas. Seems the vikings were originally led here by the Regin, who want a land of their own, and the fledgling country is now having to fight a supernatural force to keep their democracy. Abyssal is a deep dive, literally, into the Mariana Trench, and it has a little bit of a SeaQuest vibe combined with a little bit of a Savage vibe. Tesla Rangers is a battle between cowboys vs robots, set 11 years after American conceded The Robot War, but are trying to take back everything west of the Mississippi. The Lost City of Astla is a sci-fantasy setting in which the heroes, part of a race of people who abandoned their home planet for the stars, must return to what remains in hopes of stopping the end of their peoples.

Each setting details any new, relevant Edges and Setting Rules, as well as includes a Savage Tale. It's an interesting format that I wouldn't mind seeing more of, really. 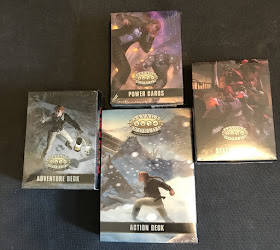 Four card deck are included: The Action Deck is oversized and is a set of poker cards, designed to make it easier for a GM to spot the next card in the initiative from across the table. The face cards are filled with monsters and heroes, none that I immediately recognized from iconic Savage settings, with the idea being to make the deck as universally applicable as possible. For what it's worth, I found shuffling the oversized deck to be simple enough, but I also have long fingers. The Adventure Deck is a new edition of the old Adventure Deck, fully updated to the current rules set where applicable. The Adventure Deck allows the PCs a certain amount of (randomly drawn) narrative authority in the game. We use it religiously, but it's not to every group's taste. The Status Deck is a deck of reference cards detailing the game mechanics for the various statuses codified in Adventure Edition - Shaken, Wounded, Fatigue, Distracted, Vulnerable, Entangled, Bound, Stunned, (On) Hold, Aim and Defend. Power Cards are references for each of the powers in the current edition, as well as the power specific modifiers.

I like the oversized Action Deck, though I never had trouble with standard playing cards. I love the Adventure Deck, and am a big fan of the update (in art, layout and rules). The other two are more "useful" than "essential"...I wouldn't have questioned their absence, but I'm impressed by their presence. Another thing worth noting: They don't come in tuck boxes, but short boxes with lids, meaning there's no struggle with opening and closing them and catching the flap that tucks against one or more of the cards. Pretty nice. 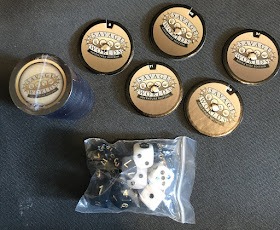 The bennies are ceramic, poker chip style...the same high quality bennies Pinnacle has sold for years, with updated imagery, matching the symbols on the logo. The dice set is a lovely black and gold set, with four Wild Dies, each with the 6 (which explodes) featuring a one of the four icons from the Savage Worlds logo. Five Ammo/Power counters are included, cardboard wheels (pre-assembled) that count from 1 to 20. My only complaint about any of them is that the wheels are loose enough that it's easy to slide from number to number accidentally, thus losing track of where you were actually at.

Four 6 inch ruler are included. These are paper, not cardboard, so handle with care. And if you don't use rulers for moving minis at the table? They all have reference charts on them, including a Raise Calculator on one of them, if you happen to struggle with the math on raises (which is always 4 above the target number) on a roll. Two templates are included (acrylic, I believe), one being a Cone Template and the other being a Blast template, with rings for Small, Medium and Large blasts. The colored tokens are a huge pile of status tokens for the table, with arrows to point to the figures affected by them. These include all the statuses included in the Status deck, with more tokens available for the most common statuses (same as the Status cards). My only gripe here is the thickness of thee rulers. I figure those will be the first casualty of my set. I'll probably try to get them laminated, given their utility as references.

Two big player reference sheets are included. The first lists all the combat maneuvers and situations, as well as the injury table, the new generic Power Modifiers (powers got an overhaul in this edition) and the uses for bennies (which were expanded from previous Savage Worlds editions). The second covers the Chase rules, as well as Chase maneuvers and relevant vehicle reference charts.

Lastly, the books. IMPORTANT NOTE: The Essentials Boxed Set does not include a copy of the core rulebook. It does include the World Builders & Game Masters Guide. With my Kickstarter Pledge, I went all-in and got the Core Rules plus the (signed!) Collector's Edition.

The bottom of the box has a cavity in it that will fit your rule book. The thing I found is that, with a slight rearrangement (placing my GM screen on the very top of the box before putting the lid on, instead of placing it in the cavity where the rulebook goes), I can fit both of my rulebooks in the box, as well as everything else, and the lid only creeps up about an inch or so (and given how deep the box is, that's not enough to sweat over).

My only other gripe with the boxed set itself is that the insert that holds the cards, bennies, dice and trackers could have used a lip all the way around it. If it had, the whole insert could be pulled out without removing the individual items first. As it stands, doing that now will lead to items spilling everywhere, especially once your bennies are unwrapped (unless you have a storage solution for them).

What About The Game Itself?

I didn't really set out to review the game tonight. I will say I've been running SWADE since the PDF dropped (and I got it early because I was working with a licensee), and I think it runs a lot better than I feared. I ultimately embraced all the changes within (that have come up in our games). It is annoying that there's a page of last-minute errata, but Pinnacle did collect it all on one easily downloadable sheet for us.

I rarely spring for Collector's Editions, but I caved on this one because a) it's autographed and I'm a big fan of the work of all three signatories: Jodi Black, Clint Black and Shane Hensley, and b) my love for Savage Worlds is well-documented. If there's a game I'm going all-in for, it should probably be this one. It's spent more time at my table over the last decade than any other game, whether running published settings like Deadlands and ETU, or converted settings like my own Savage Pendragon. I hope I get to use it for many more years.

One other thing about the new rules that I've found: conversions from past editions are overblown. In most cases, the changes were under the hood, meaning the Power/Edge/Terminology is still there, it just works differently. There were a few cases that are a little more work, where Edges were split up, or skills were combined, but I was running my ETU game in SWADE months before they released a free conversion, and I was probably about 95% of where they were, by applying common sense when looking at the rules.

That said, I'll try to find the time to do a review of the new edition, but no promises. This was kind of a spur of the moment review as it was.

No regrets. Savage Worlds is my game of choice, has been for 10 years now. No regrets on splurging on the big, fancy boxed set, when I was getting by on $10 core rules releases for years. I was, frankly, amazed at juuuuuust how comprehensive this thing was. They thought of things I never would have (a Raise calculator on a ruler? No freaking way)...and the aids were designed with both the player and the GM in mind.

Even better? I game primarily on Roll20, and a good chunk of this stuff was also provided as digital files for us to import into our virtual tabletops. The more I game online, the more I REALLY appreciate companies that look out for us who don't necessarily have a face to face group anymore.

If this sounds appealing to you, you can preorder the set, or most of the individual items, here.
Tommy Brownell at 9:49 PM
Share